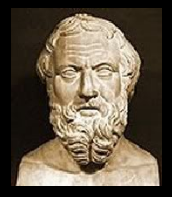 Herodotus was a Greek historian who was born in the Persian empire.  He invented history and is know as the father of history.  His work seems to have originated around the Athenians. He is mostly known for his writing of the histories.  His books also contain fairy tales, gossip, and legends.  Little is known about Herodotus’s life  other than what can be deduced from his writings, however we do know that in his early days he did a great deal of traveling.  He mostly wrote about wars between Greece and Persia.  History (written by him)was divided into nine books, books 1-5 talked about the Greco-Persia wars. 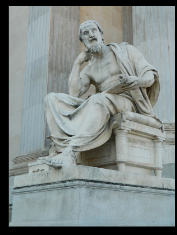 Little is known about herodotus’s life but from what we can infer he traveled constantly and was born in halicarnassus, a small Greek country on the coast of asia minor, after he left he never returned. Most information about him is only able to be deduced from his writings. Herodotus traveled broadly in Egypt, Africa, and Asia Minor and wrote down his experiences and observations. When Herodotus was exiled from halicarcinus, he joined the new colony of Thurii in southern Italy where he died at around 425 B.C. .

Sometime around the year 425 B.C., the writer and geographer Herodotus published the first true account of history giving Herodotus the name the father of history a long  account of the Greco-Persian Wars that he called The Histories. (The Greek word “historie” means “inquiry.”) Herodotus was the first person ever to make such a systematic intricate thorough study of the past Herodotus wanted to study history to discover the cause and effect of certain events in history scholars followed in Herodotus’s footsteps for over 2500 later Histories was split into nine parts another few of Herodotus’s less famous works are an account of Egypt and  the madness of Cambyses also when Herodotus returned to Athens he was a respected speaker and writer and was given a prize of around 20,000 dollars in modern currency for his contributions to public knowledge after he died many people considered Herodotus a liar but even if Herodotus was a liar the way Herodotus viewed history forever changed the way history is viewed and studied.